So! It’s been two months since I last posted, and the year has changed from 2017 to 2018. Before I go into the actual topic of this blog post – adventures in Puglia – I think it’s time to do a little catch-up. It’s been an eventful couple of months, both in good and bad. Let’s start with the bad, to get it over with.

Here goes: we broke up with my boyfriend three weeks ago (yes, if you’re doing the math, it does add up to New Year; wasn’t a very nice one this time). I don’t feel comfortable describing it in too much detail on this blog, which I try to keep on the positive side, but it wouldn’t feel right to just swipe it under the rug and not mention it at all. The main reason for the breakup was that our plans for the future just didn’t match. It’s incredibly hard to give up someone you still love, but I think we both feel like it was the right thing to do at this point. I’m still trying to grasp that this is real, but I’m coping.

And now for some more positive news. In December, I found out that I got accepted to an interesting course at Aalto University, where I’ll be travelling to Tanzania for two weeks in February! We’re working in a team of five students to come up with a solution for better communication of climate information between smallholder farmers and the Tanzania Meteorological Agency. I’ll talk more about it later, but obviously, I’m very excited about diving into a completely new culture and working towards a sustainable solution that can make a difference in many people’s lives.

I’m already mentally preparing for the trip – as I’ve mentioned earlier, I’m more of a cool climate kind of person, who doesn’t really enjoy temperatures over 25 C. This means that the African heat will probably hit me hard (especially now that I’m accustomed to Finnish winter, with lots of snow and sub-zero temperatures). To make the transition a bit easier, I thought we might go back to summer days spent in Puglia, Italy!

I was in Puglia in last June to attend my cousin’s wedding. In addition to enjoying the magical ceremony and celebrations, we travelled around the area with my family. Here are some highlights of our roadtrip!

From Bari to Polignano a Mare

While my parents and grandparents flew from Helsinki to Rome and rented a car to drive to Puglia, me and my sister Nelli took separate flights due to scheduling issues, and flew straight to Bari. We spent one night in the city, getting accustomed to Italian habits. We’d both been to Italy before, but at least for me, it took a bit of time to adjust to the crazy traffic, the summer heat, and the loud and lively people once more! The following morning, our parents drove all the way up to Bari from Borgo san Marco to pick us up. As we drove south towards the wedding venue, we stopped in two little villages on the way.

Our first stop was Polignano a Mare, a place that I’d spotted on Pinterest and really wanted to see. There’s an amazing beach in the town, lined with rocky cliffs with old stone buildings standing on the top. Now, it had been a long, long time since I’d been to a beach somewhere that wasn’t Finland or Scotland, and even though I’m not the kind of person who spends the whole summer grilling themselves on a sunny beach, I was pretty psyched. 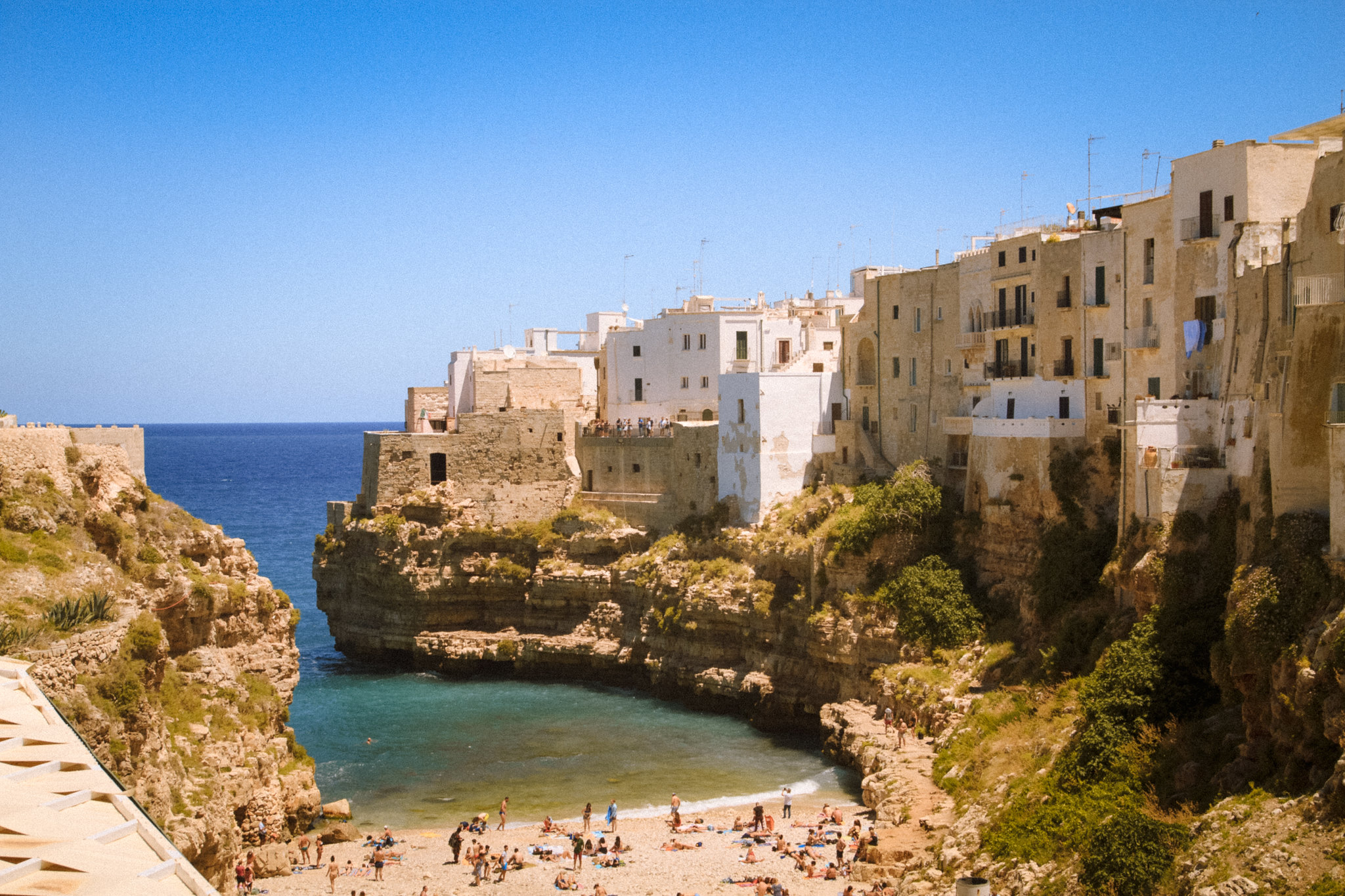 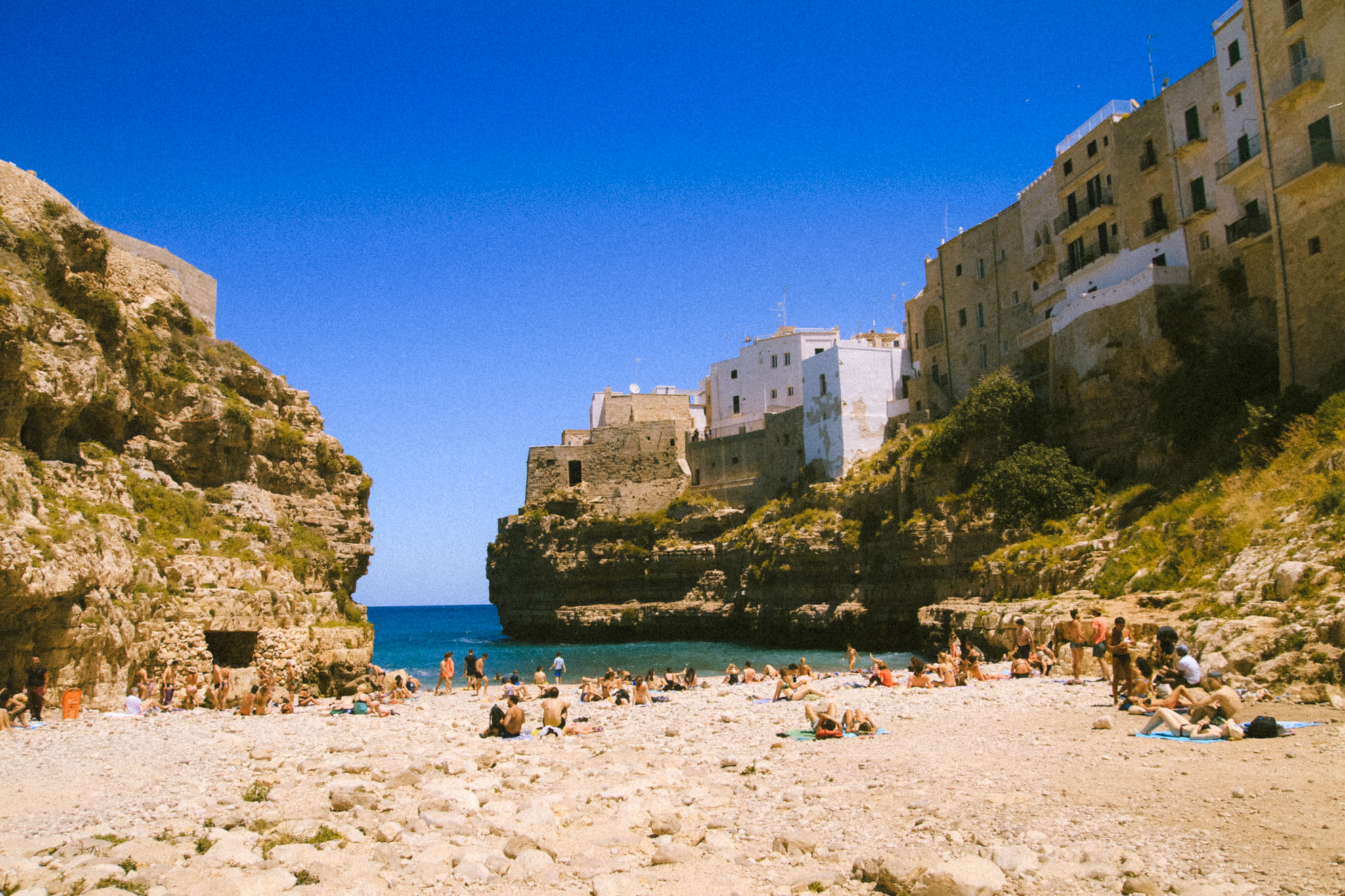 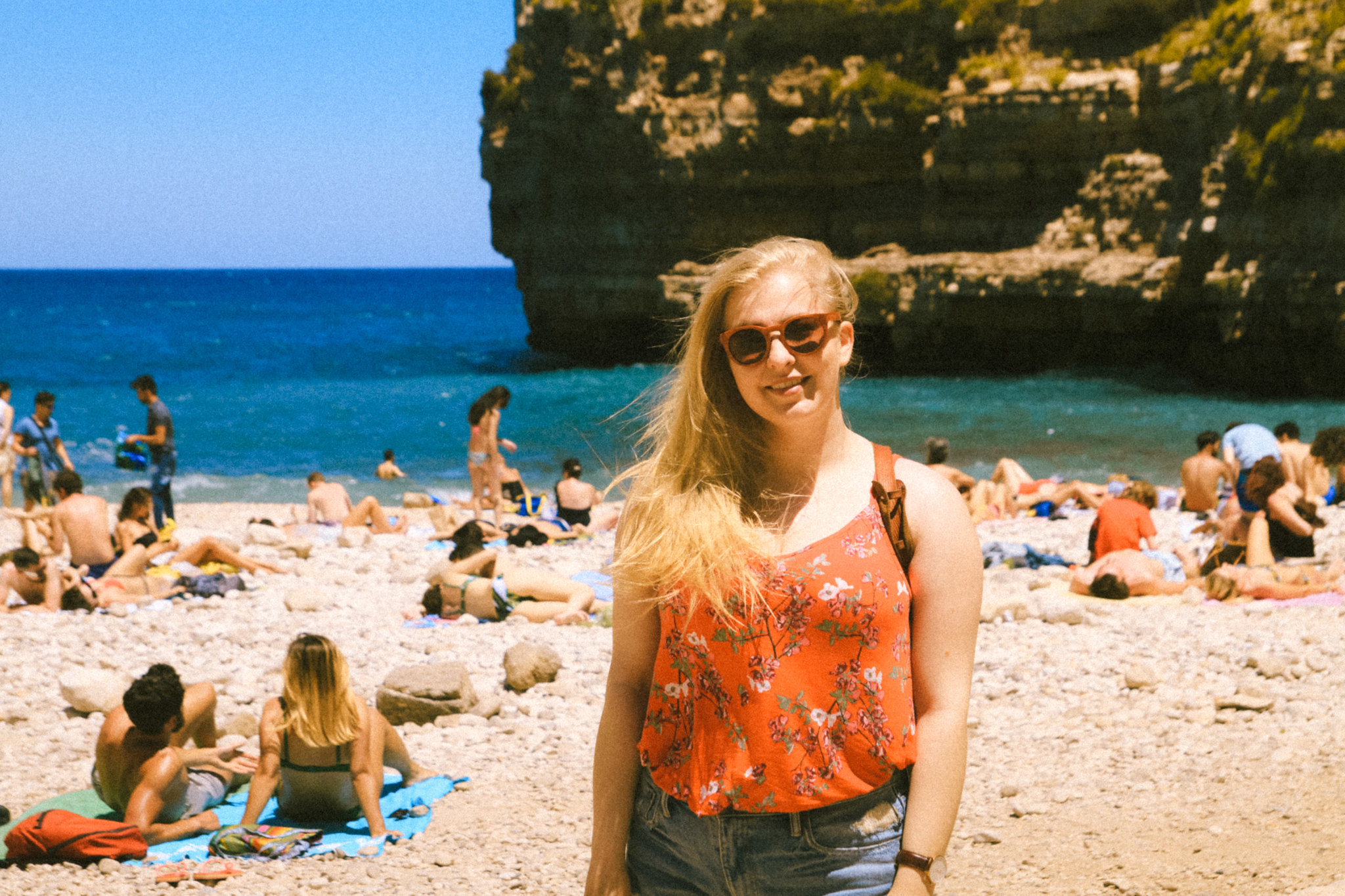 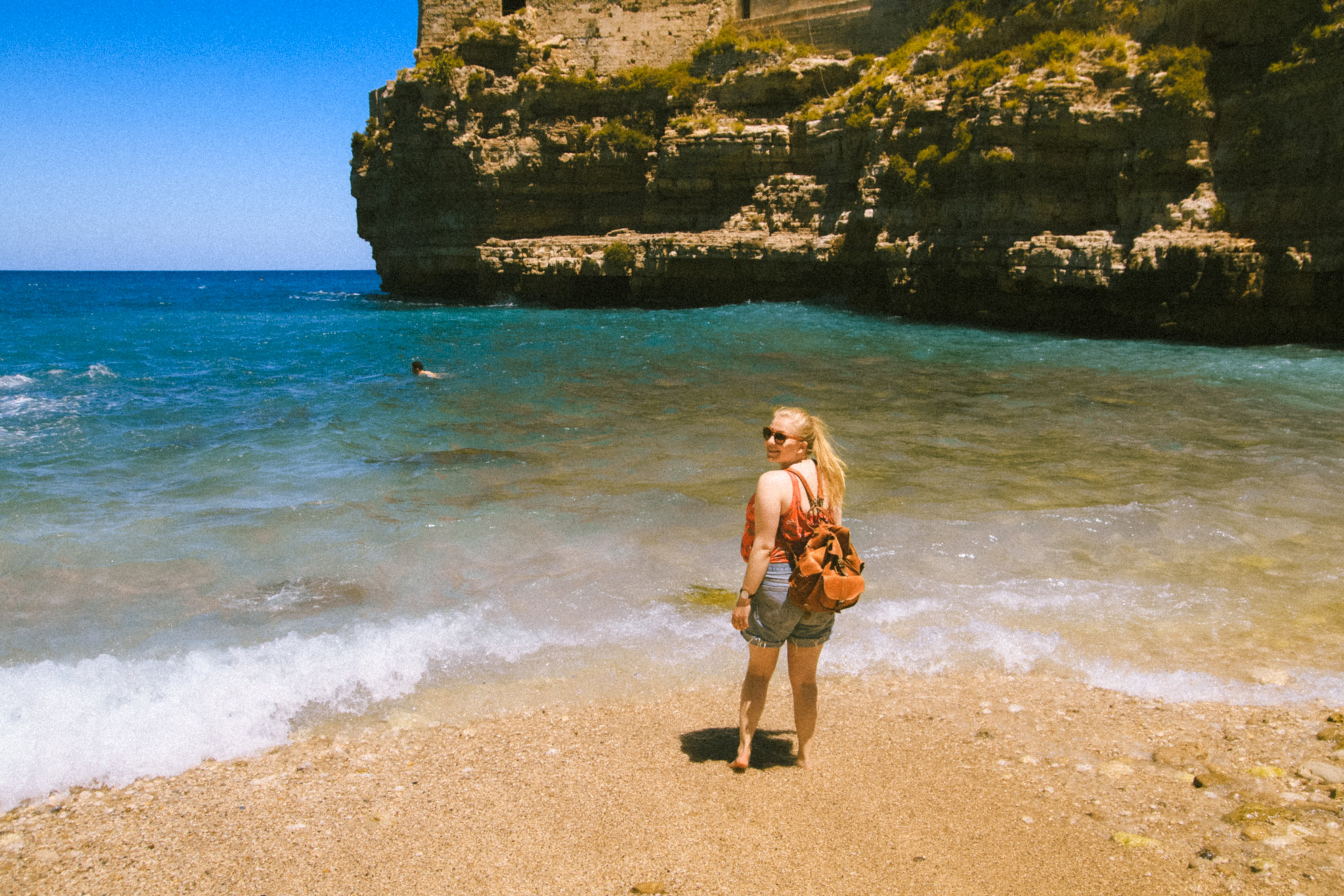 I was a bit bummed that I hadn’t worn a bikini under my summer gear, and couldn’t go swimming in the warm water. However, I did dip my feet in the water and explore the Grotta Piana – a little cave that opened out onto the other side of the cliffs. It wasn’t nearly as dark in the tunnel as the picture below makes it seem – it was light enough to see where you stepped while wading in the ankle-deep water. The views that greeted us at the other end were once again amazing! 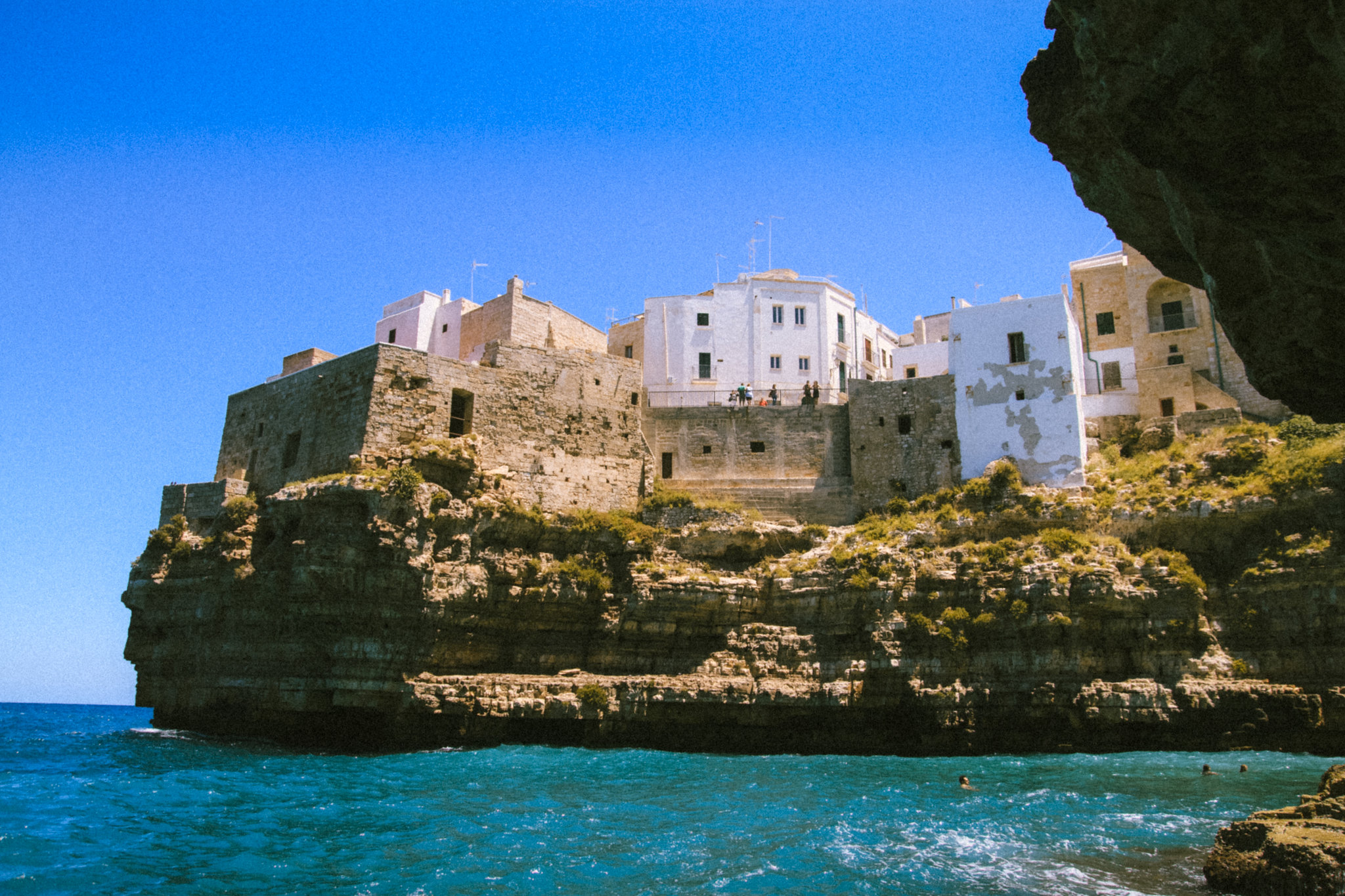 Our next stop was the UNESCO World Heritage site of Alberobello. The town is known for its trulli, the traditional stone huts with conical roofs. We took a leisurely stroll along the winding streets, admiring the whimsical buildings, and popping into some of the crafts stores while enjoying the best pistachio ice cream I’ve ever had in my life. The town was pretty, but I think my favourite part was still the ice cream 😉 And the fact that when we walked into a local supermarket, the first thing we saw was rows and rows of different kinds of pasta and tomato sauce! 😀 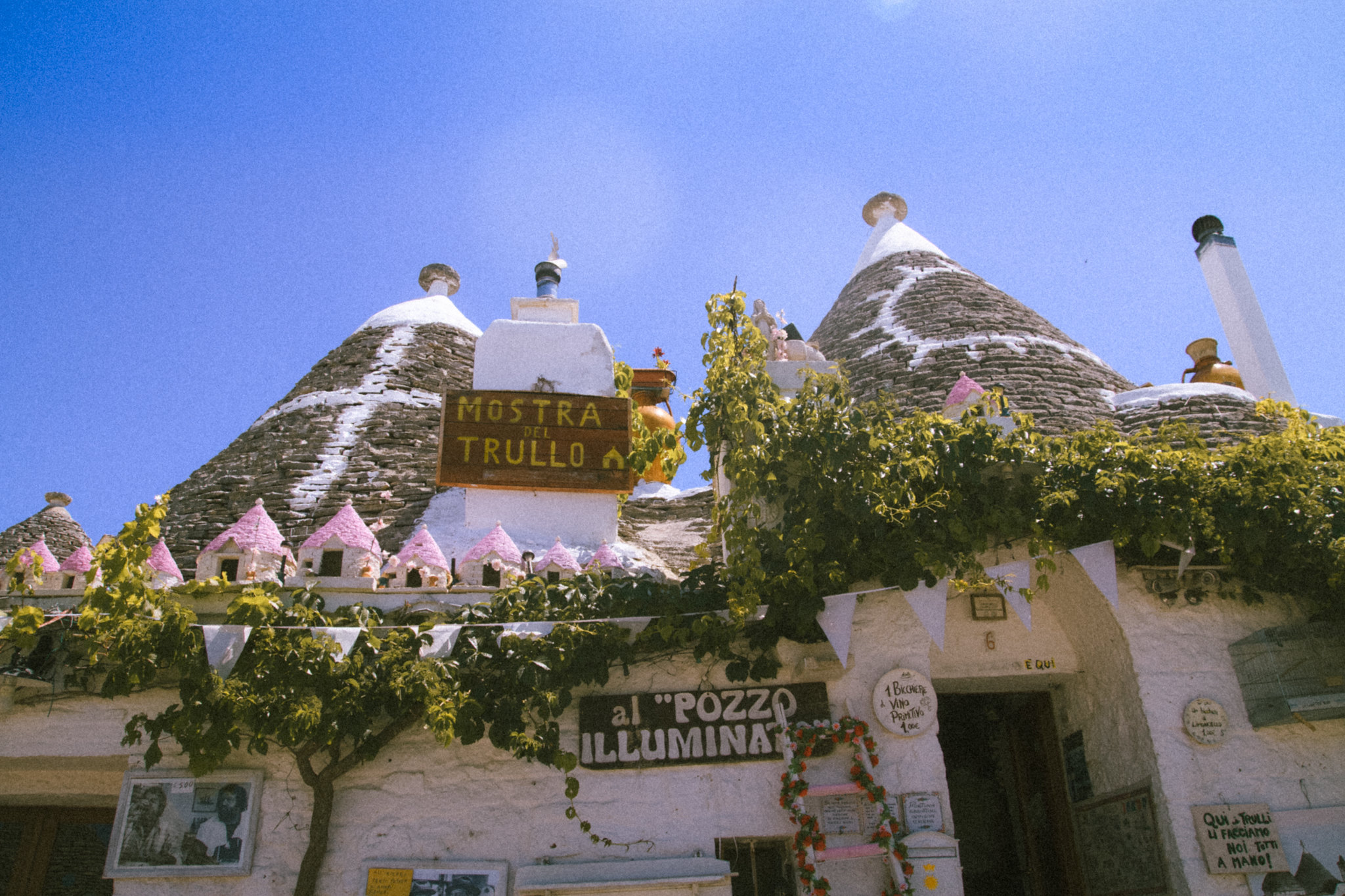 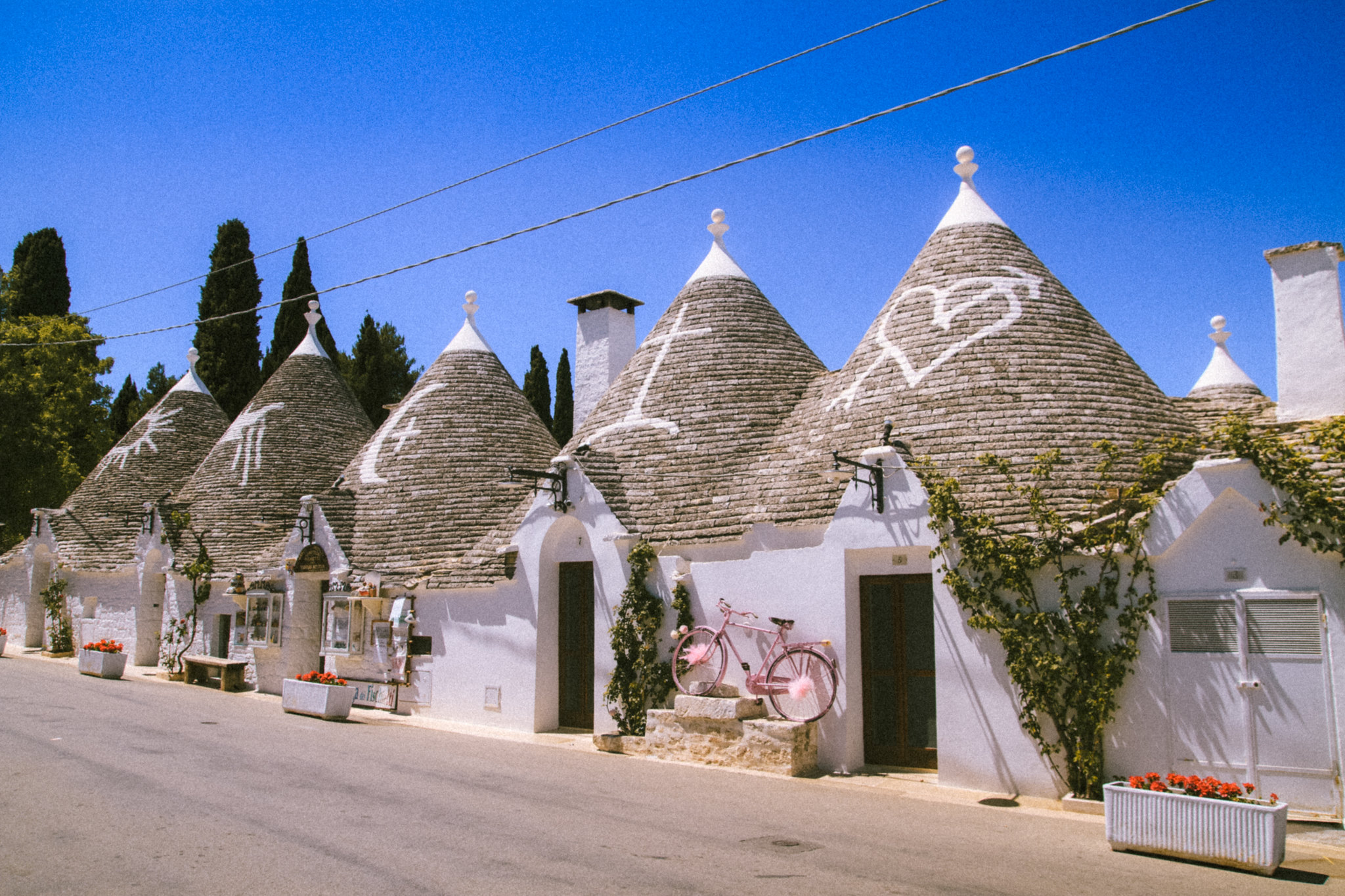 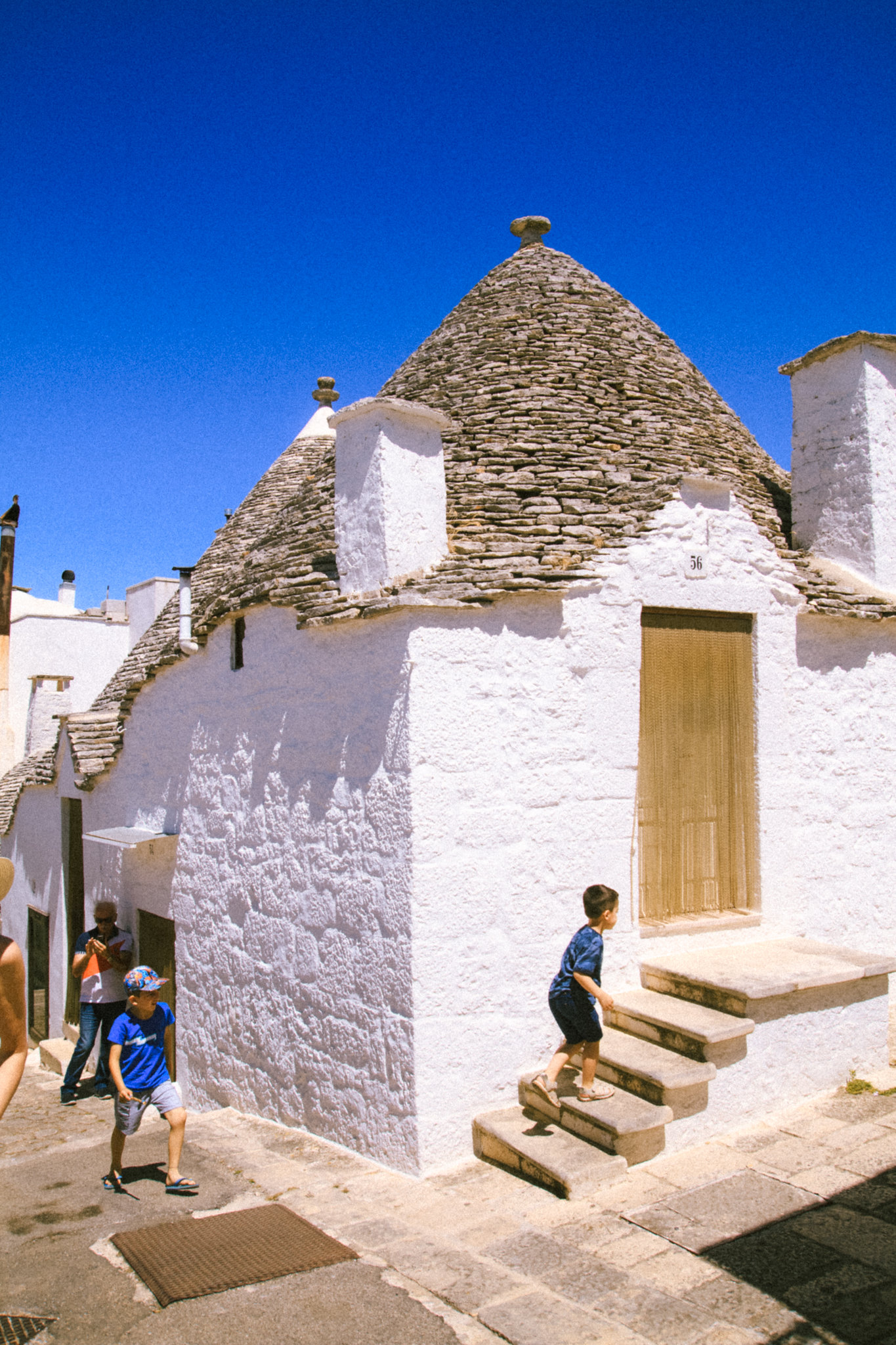 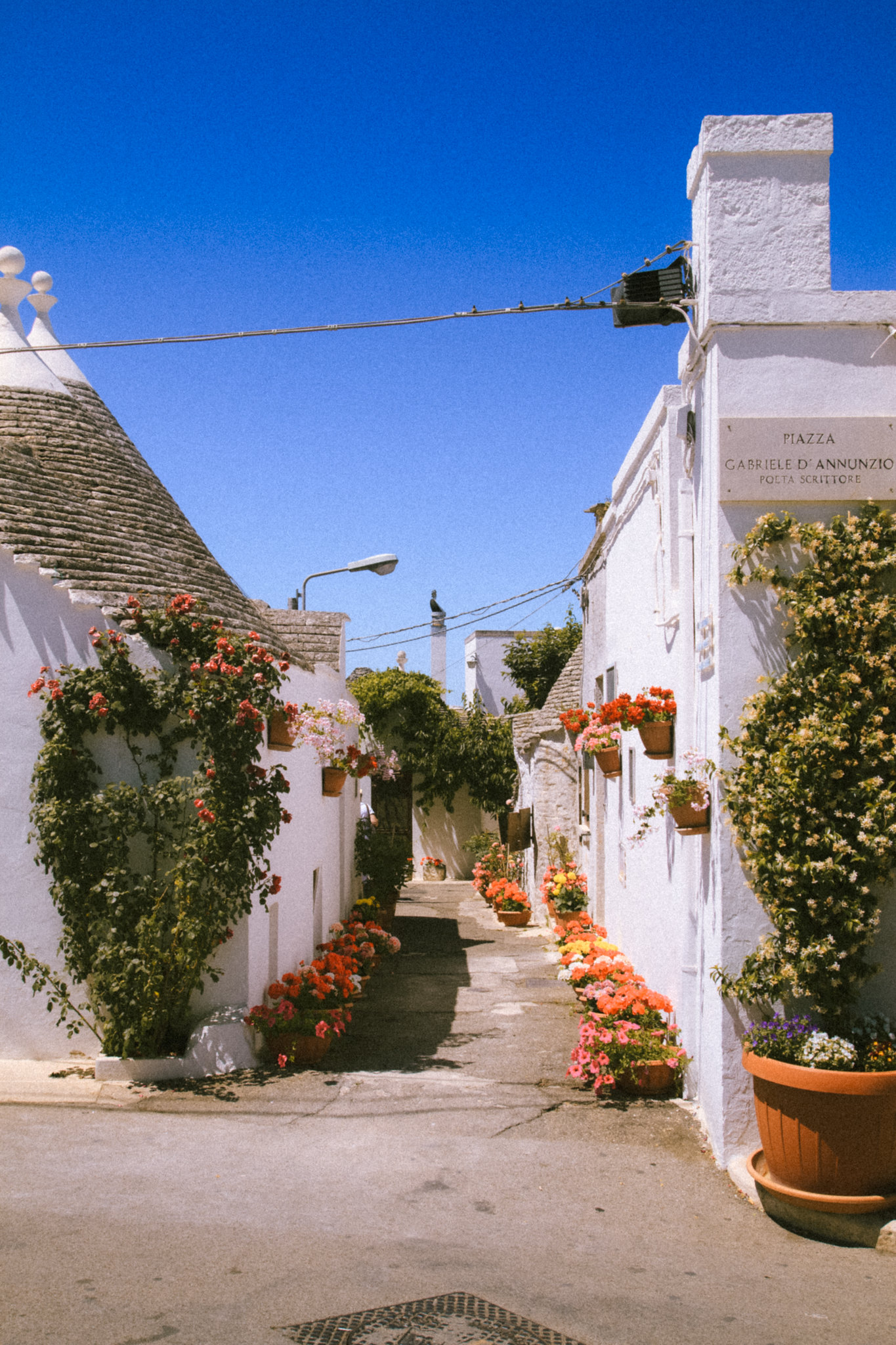 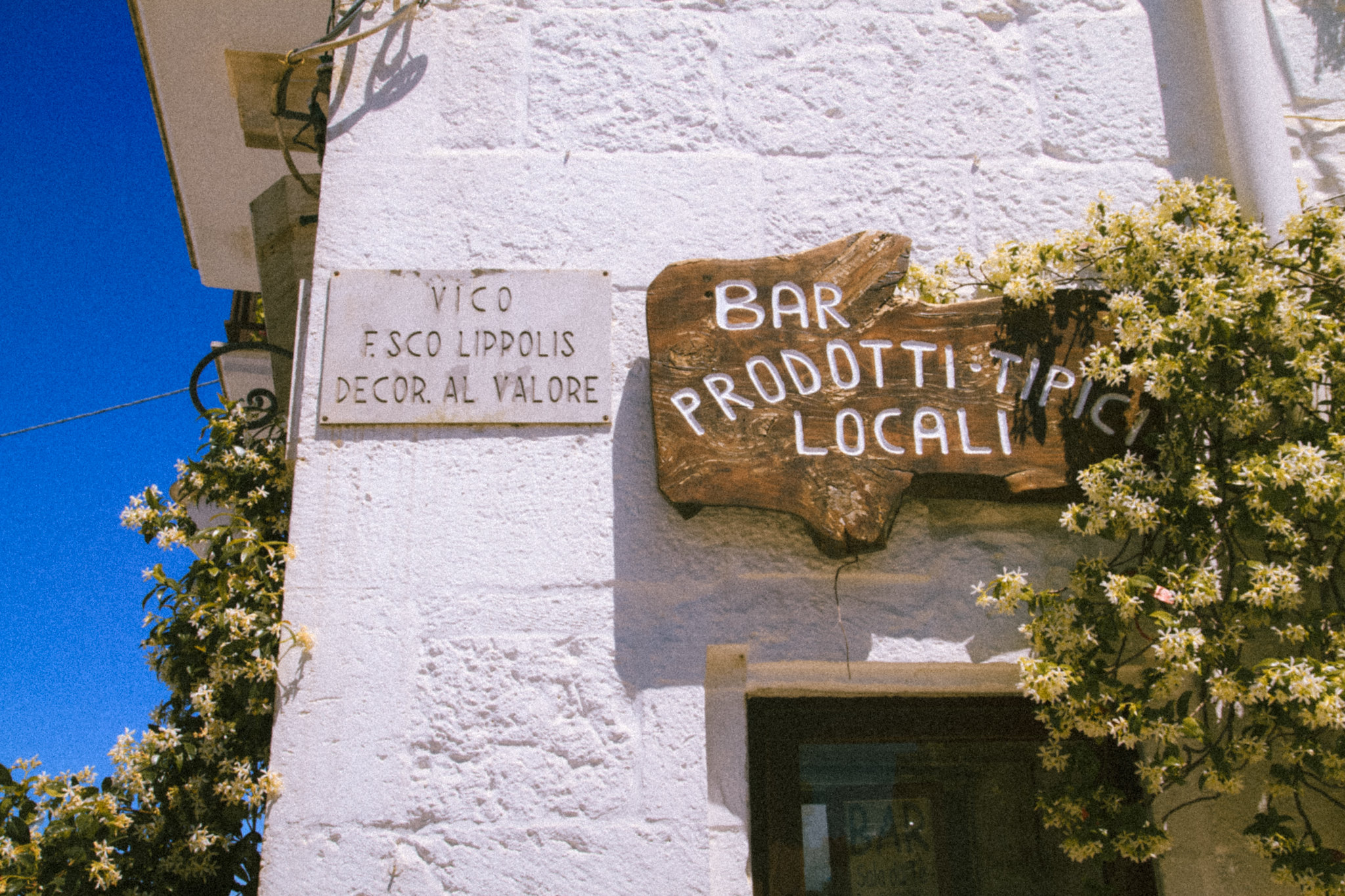 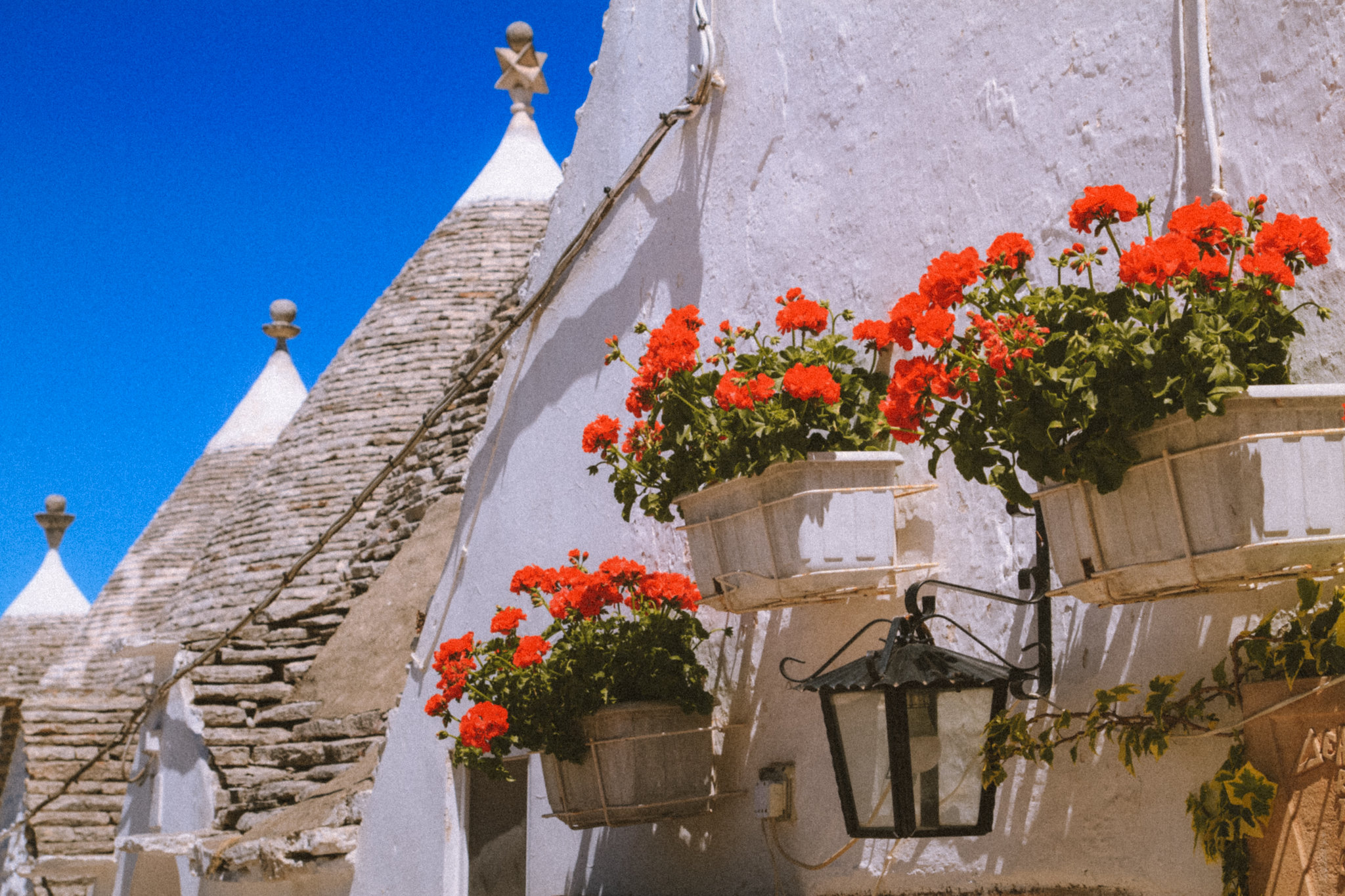 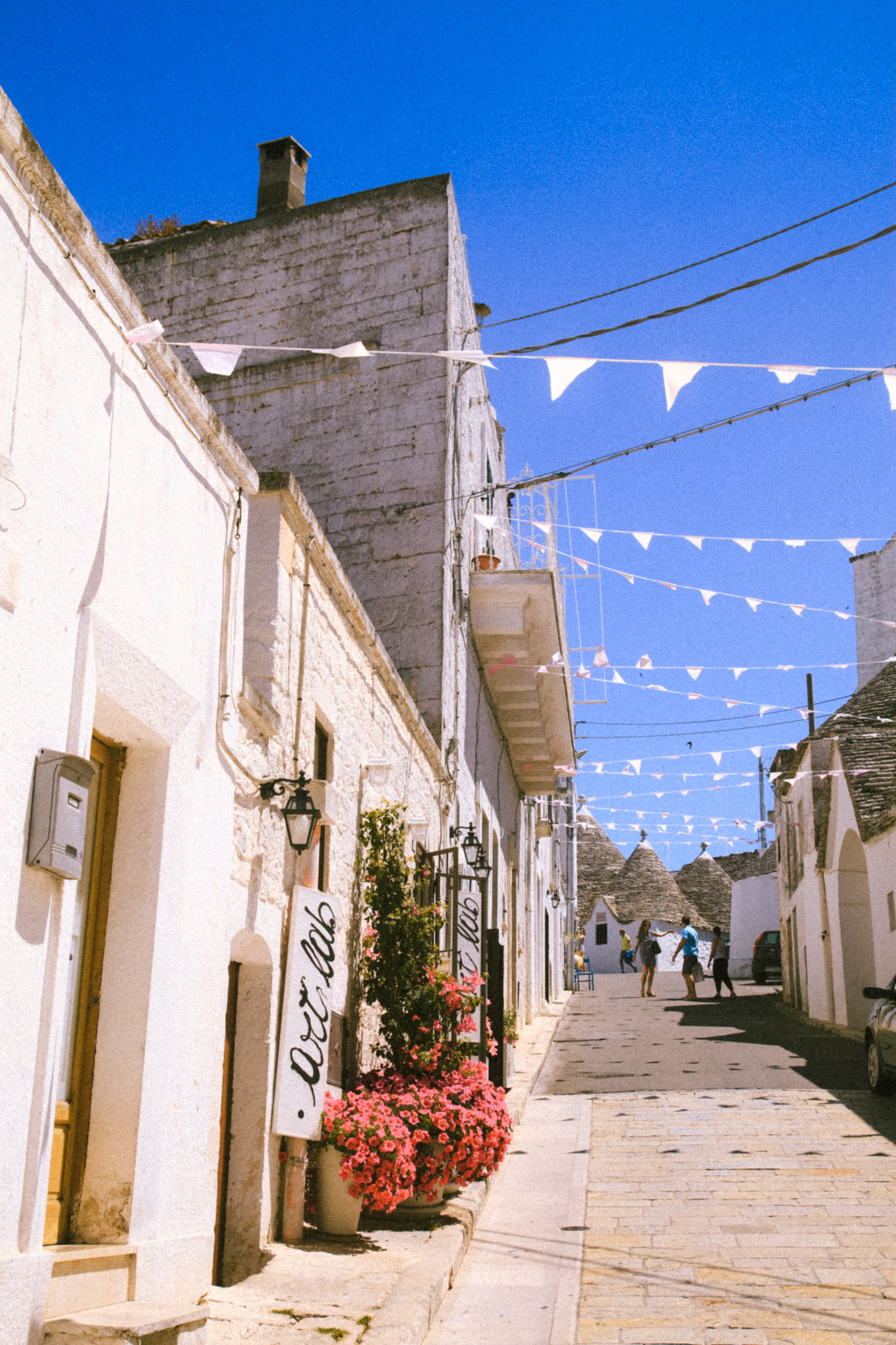 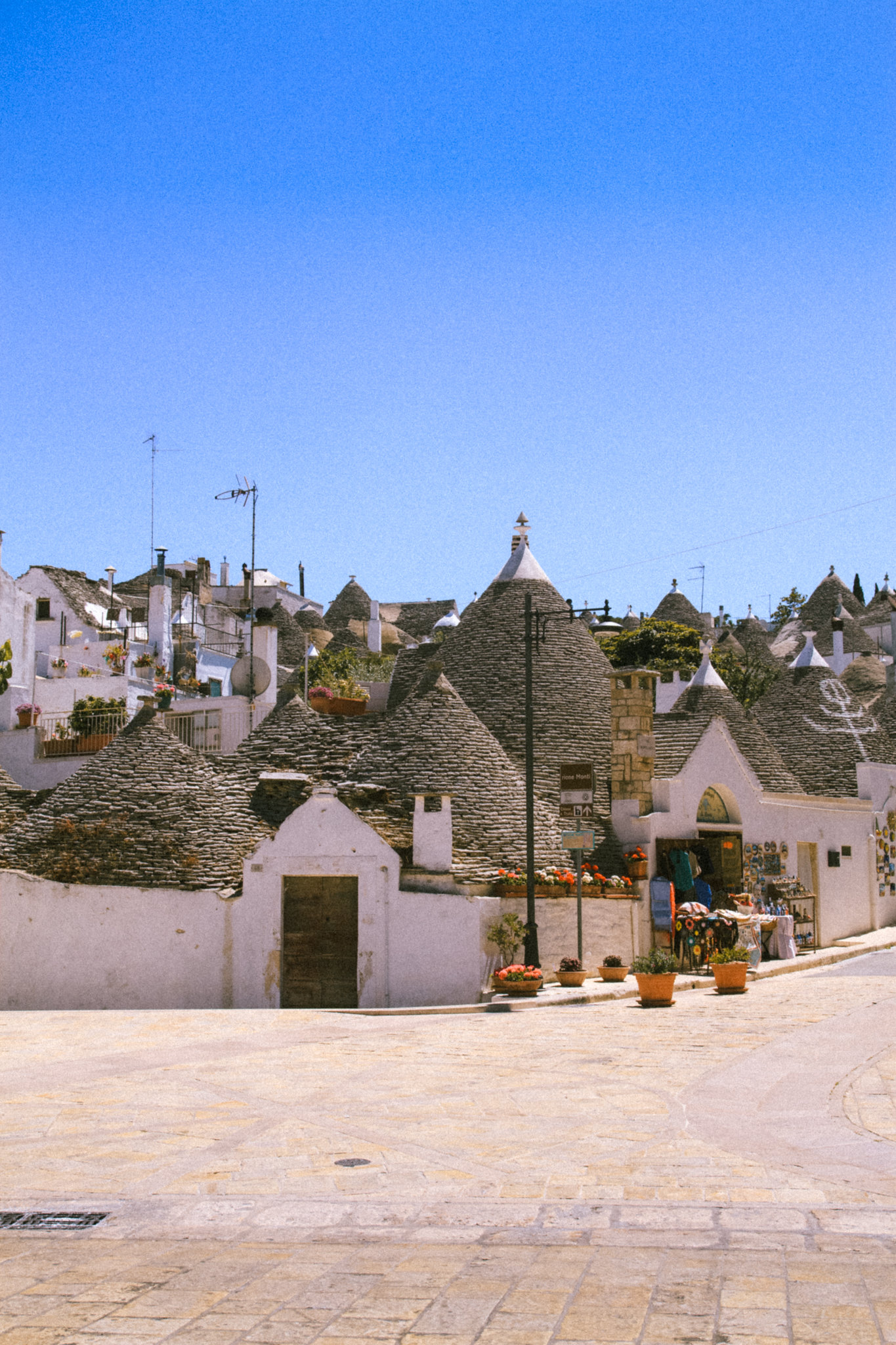 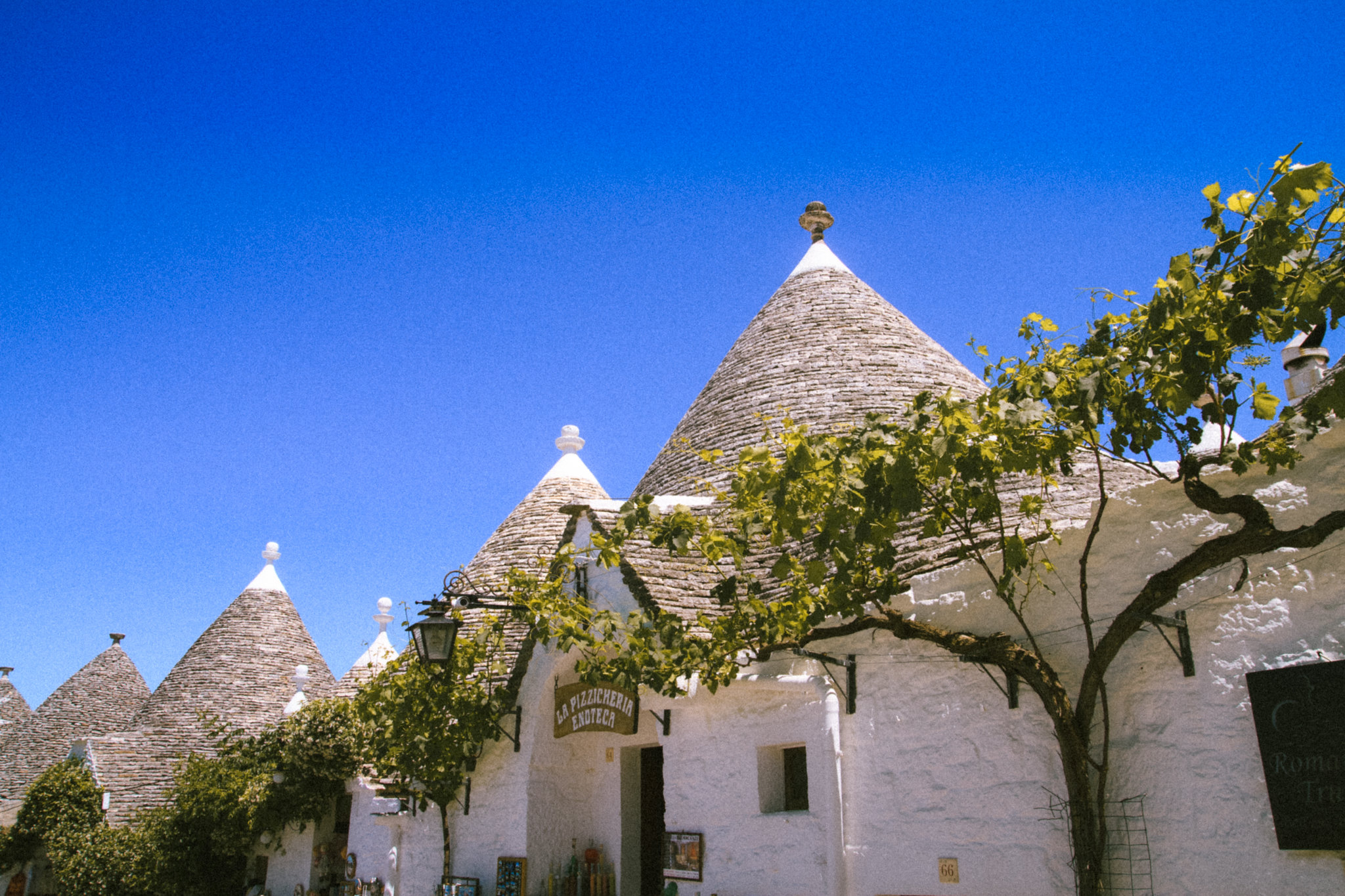 From Alberobello, we drove to the wedding venue to get started on the weekend of celebrations. You can read all about the wedding in a separate post!

After two days of wedding celebrations, we hit the road again. This time, we explored the area south of Borgo san Marco. First, we checked out the ancient town of Brindisi, which had a very traditional Italian outlook: narrow streets lined with buildings made out of yellowish stone, and ruins of Roman architecture standing here and there like it’s no big deal. 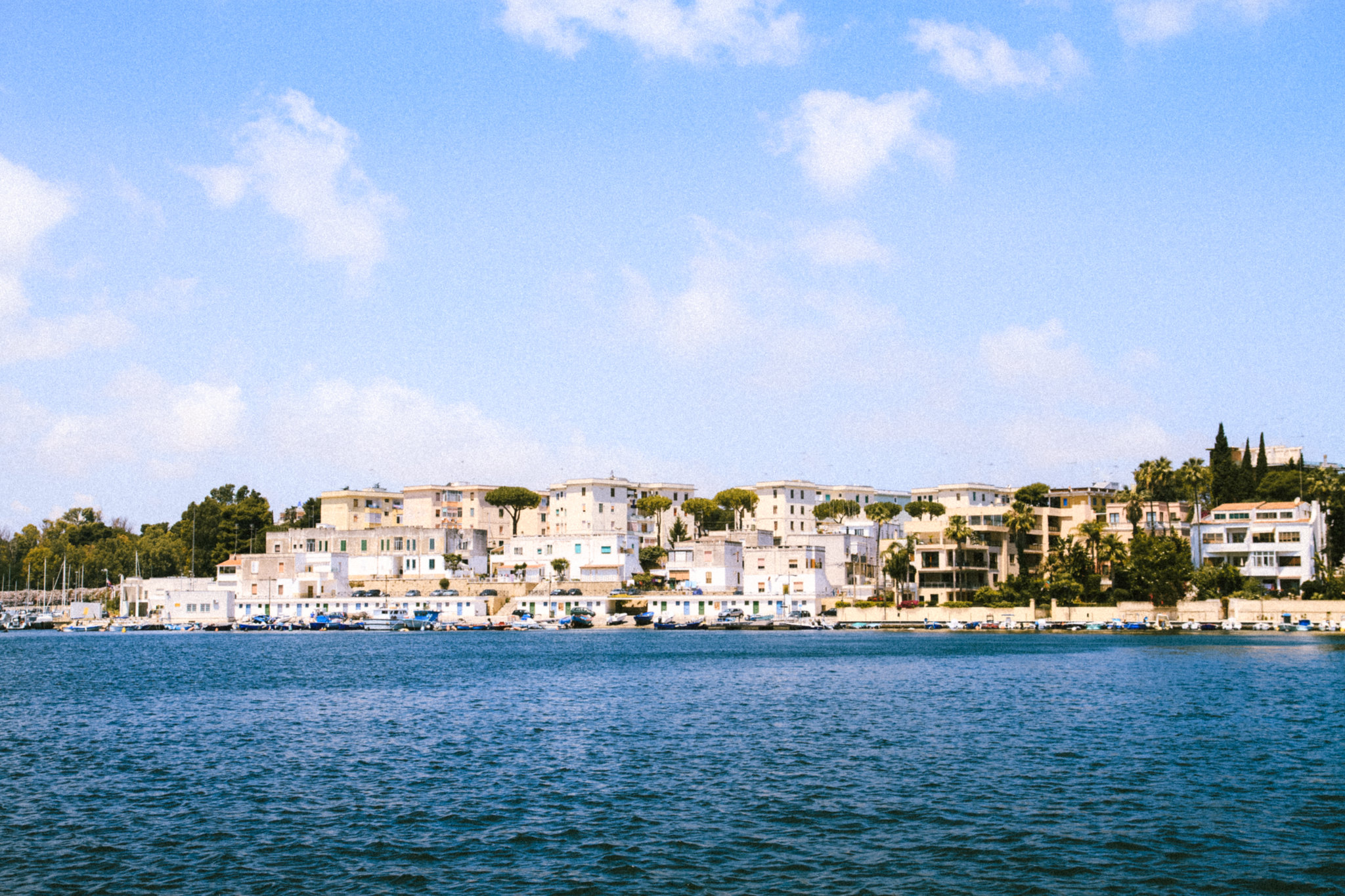 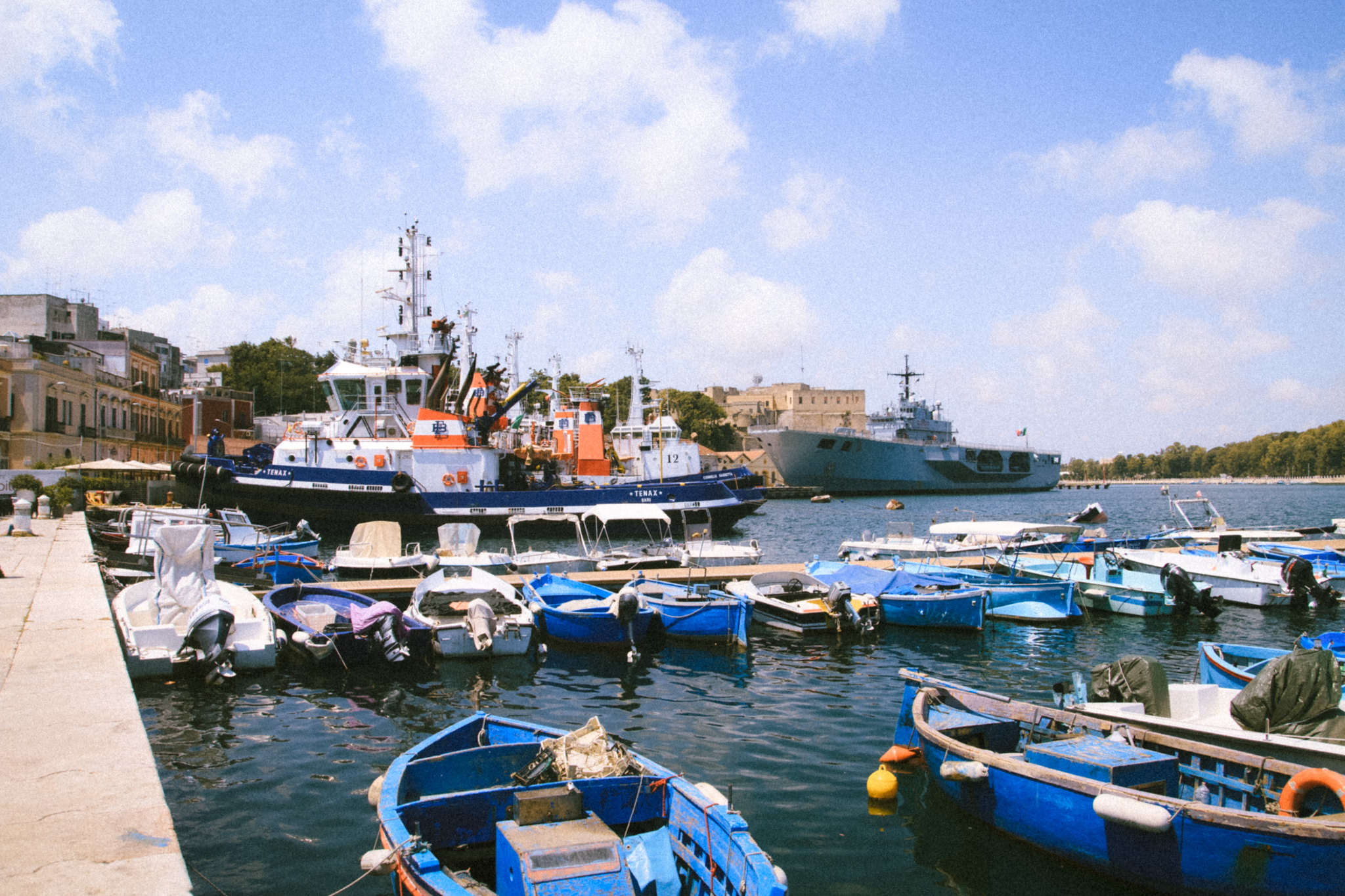 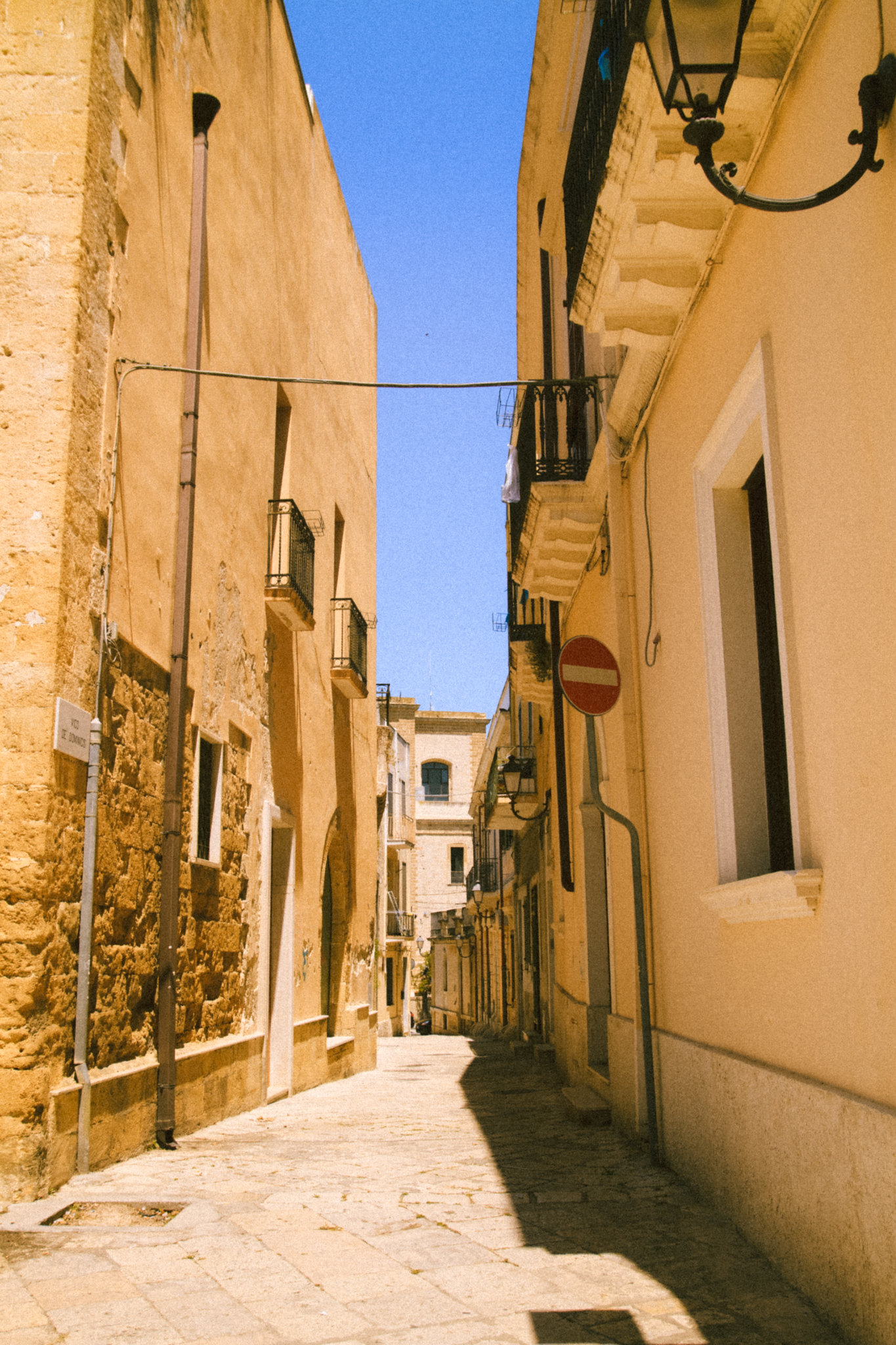 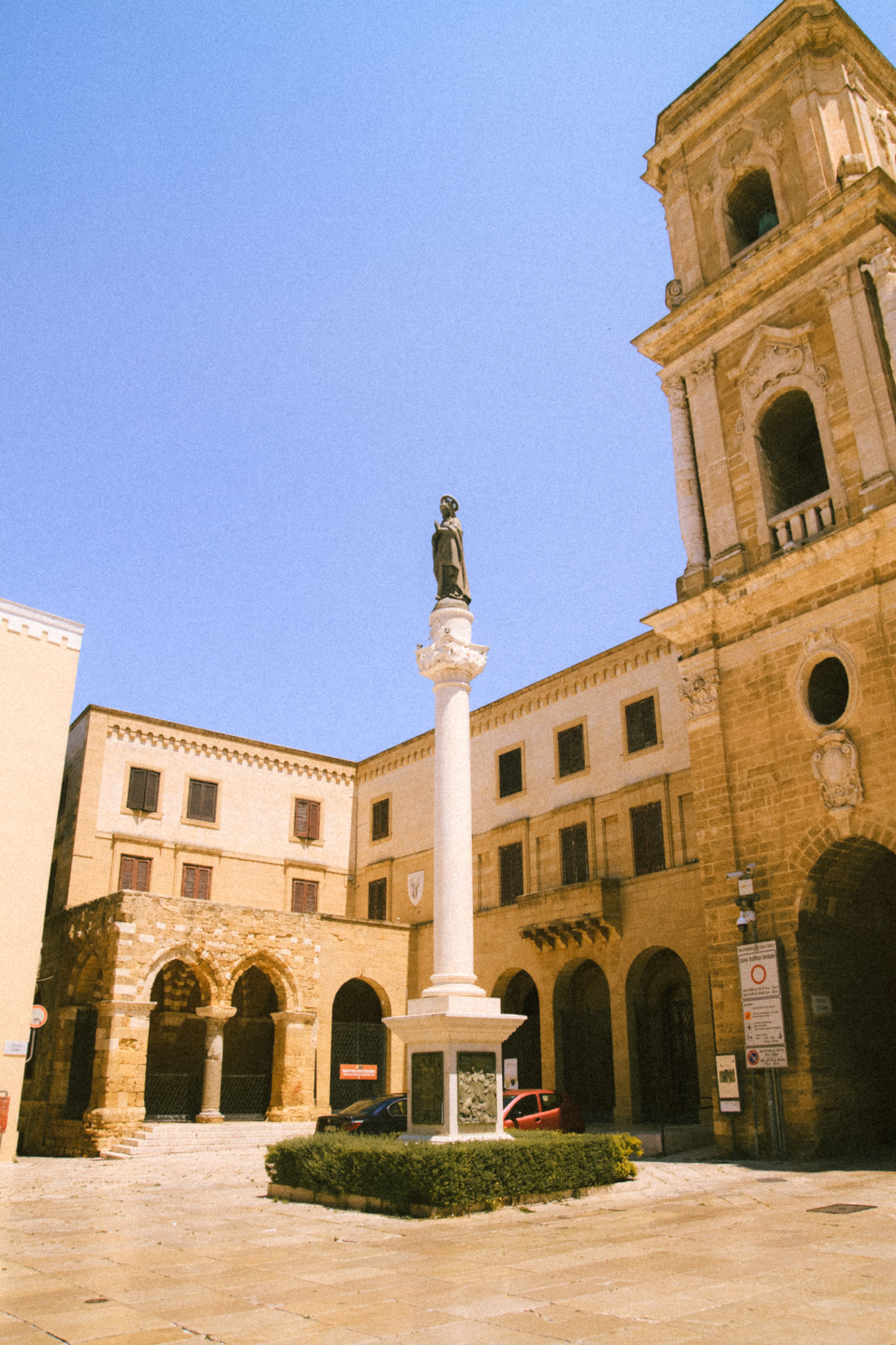 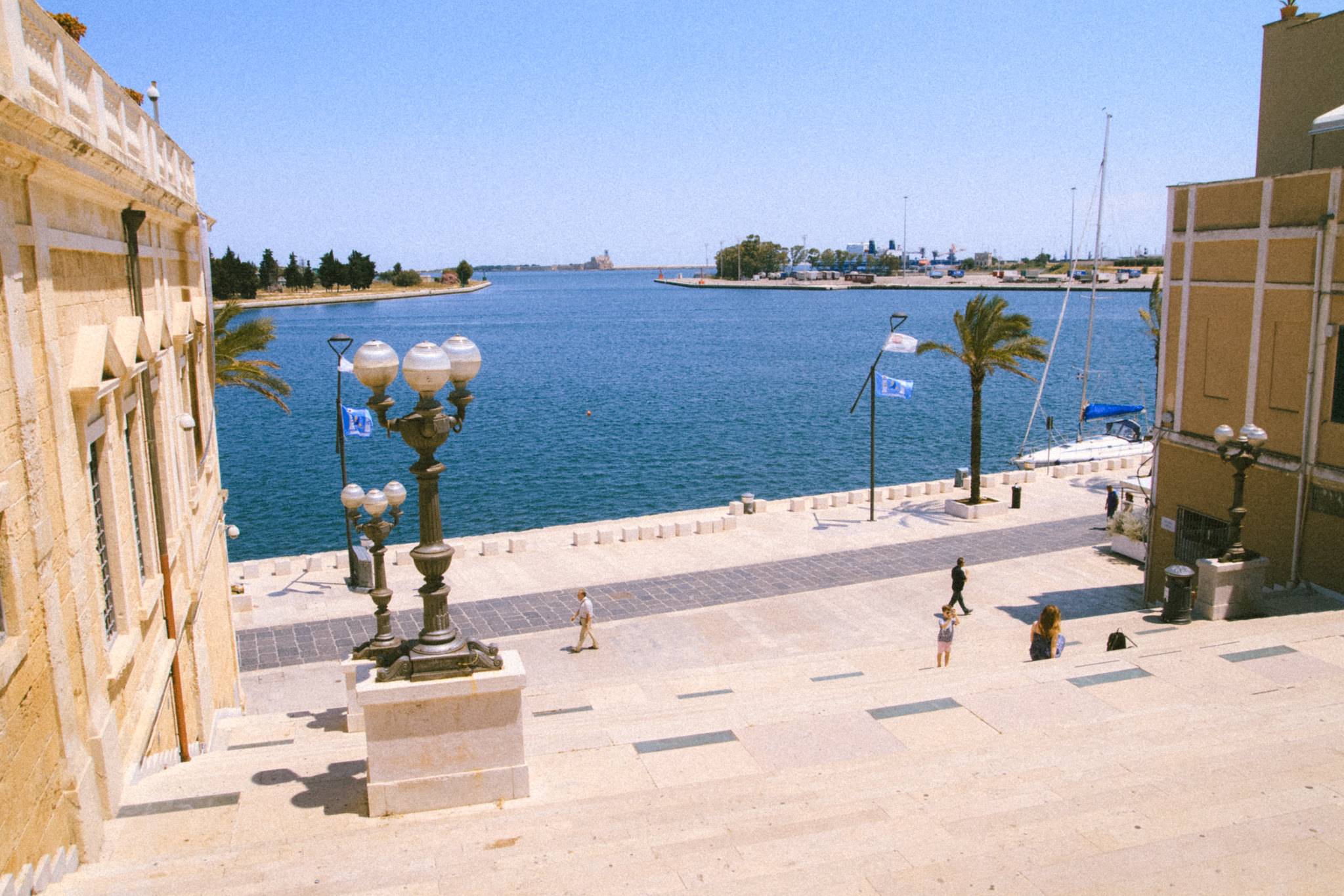 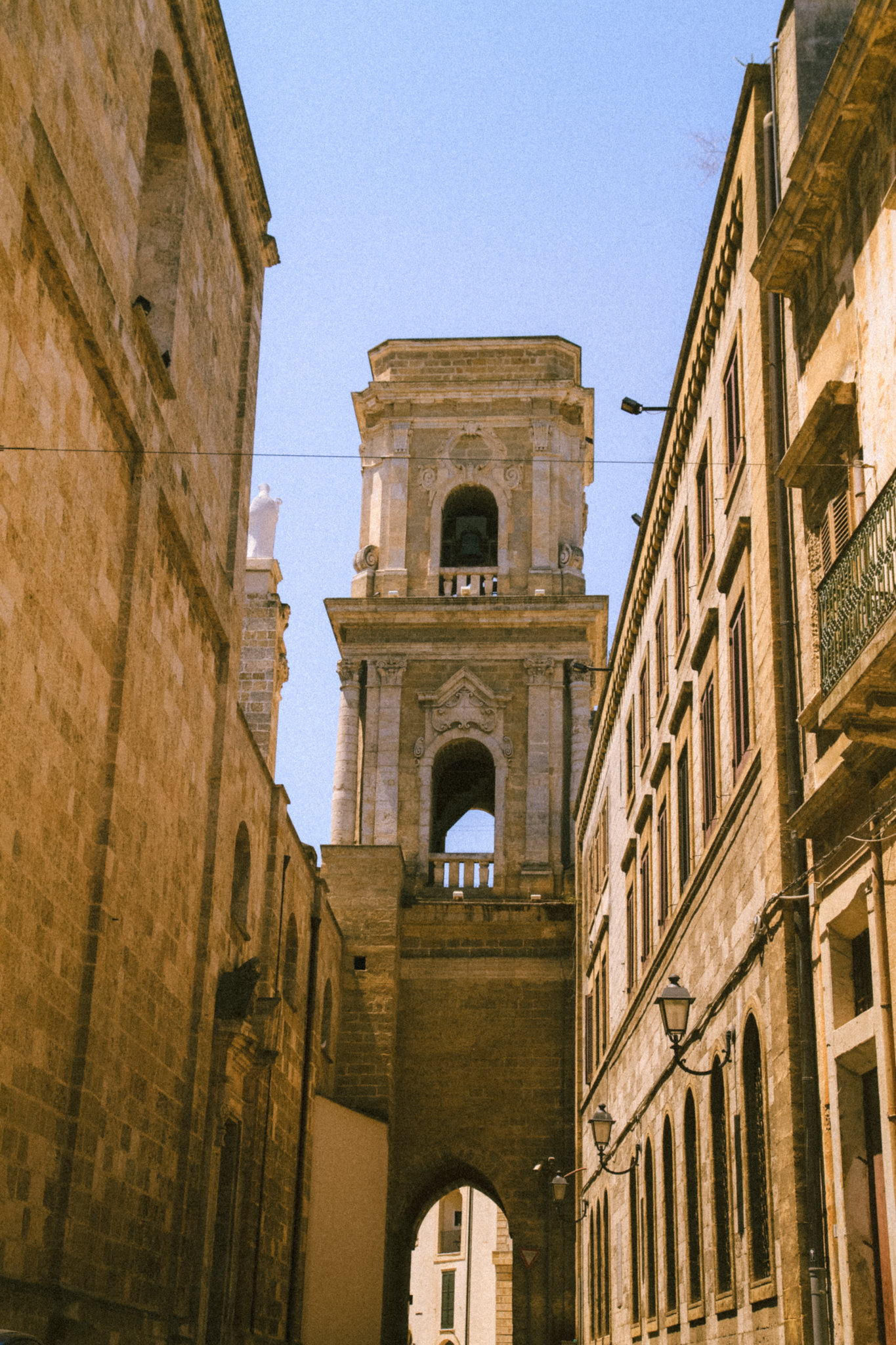 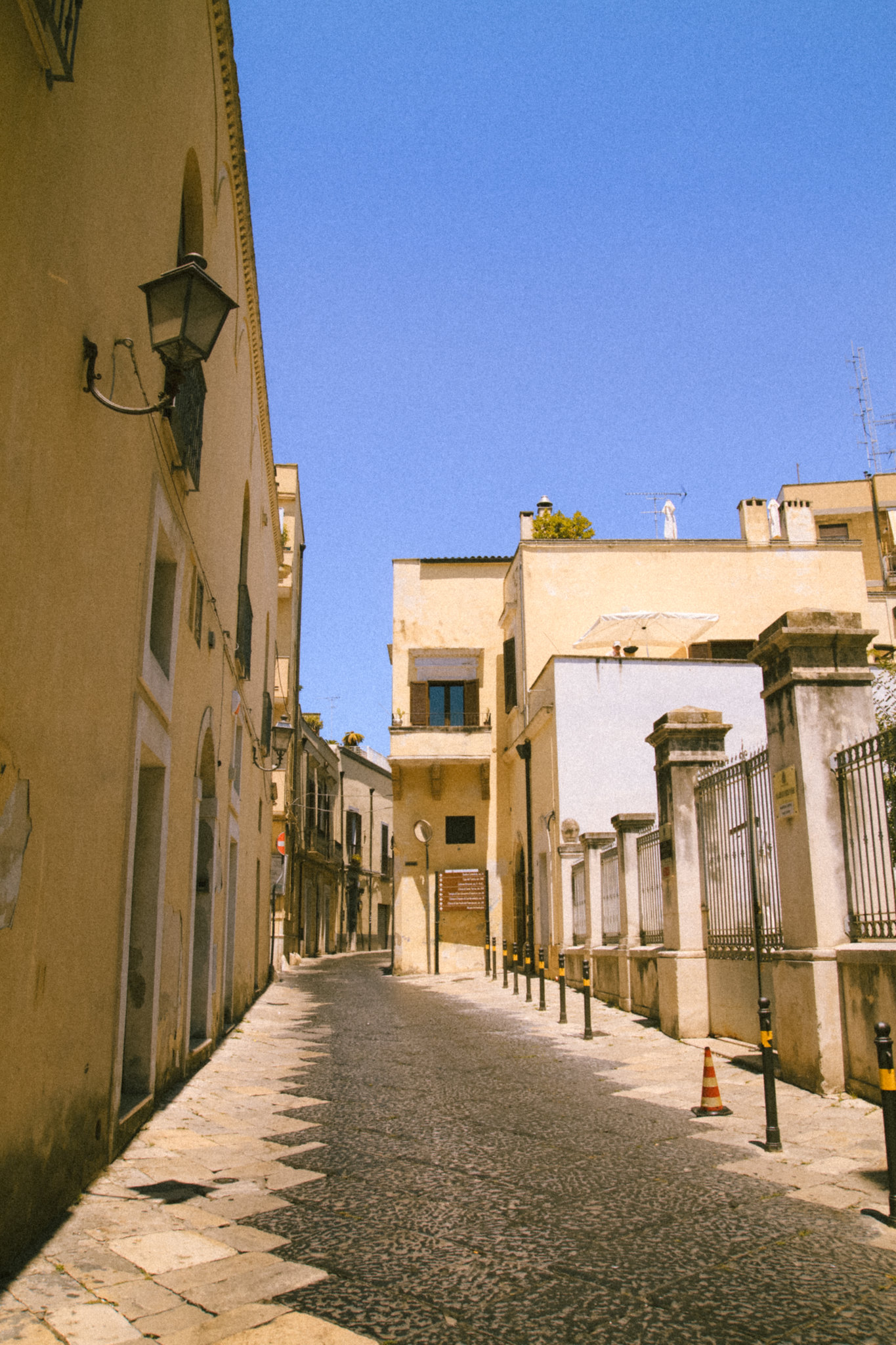 As it was a Sunday, the town was a bit sleepy and there wasn’t a lot to do. After lunch, we decided to drive to a nearby beach, Guna, to make the most of the sunny day.

Visiting Polignano a Mare’s beautiful beach (and swimming at the hotel pool) had left me dreaming of dipping into the Mediterranean, and that’s exactly what I got to do at Guna. While the beach itself wasn’t very interesting, the wonderful, warm waves were the highlight of my trip. When I was a kid, we used to go on beach holidays with my parents – we visited the Canary Islands, Mauritius, Mallorca, Cape Verde and Madeira, so I had plenty of opportunities to swim in a warm sea (as opposed to the not-so-warm summer temperatures of the Baltic Sea). After 2005, however, we had mostly been on city getaways, so it had been over ten years since I’d felt the touch of milky warm seawater on my skin; and, to be honest, I hadn’t even actively been thinking about what I was missing out on. As we floated in the waves with my mum and sister, all of those childhood memories came flooding back to my mind, and in that moment I just felt incredibly lucky and happy. The Mediterranean Sea managed to bring out the beach person in me after all! 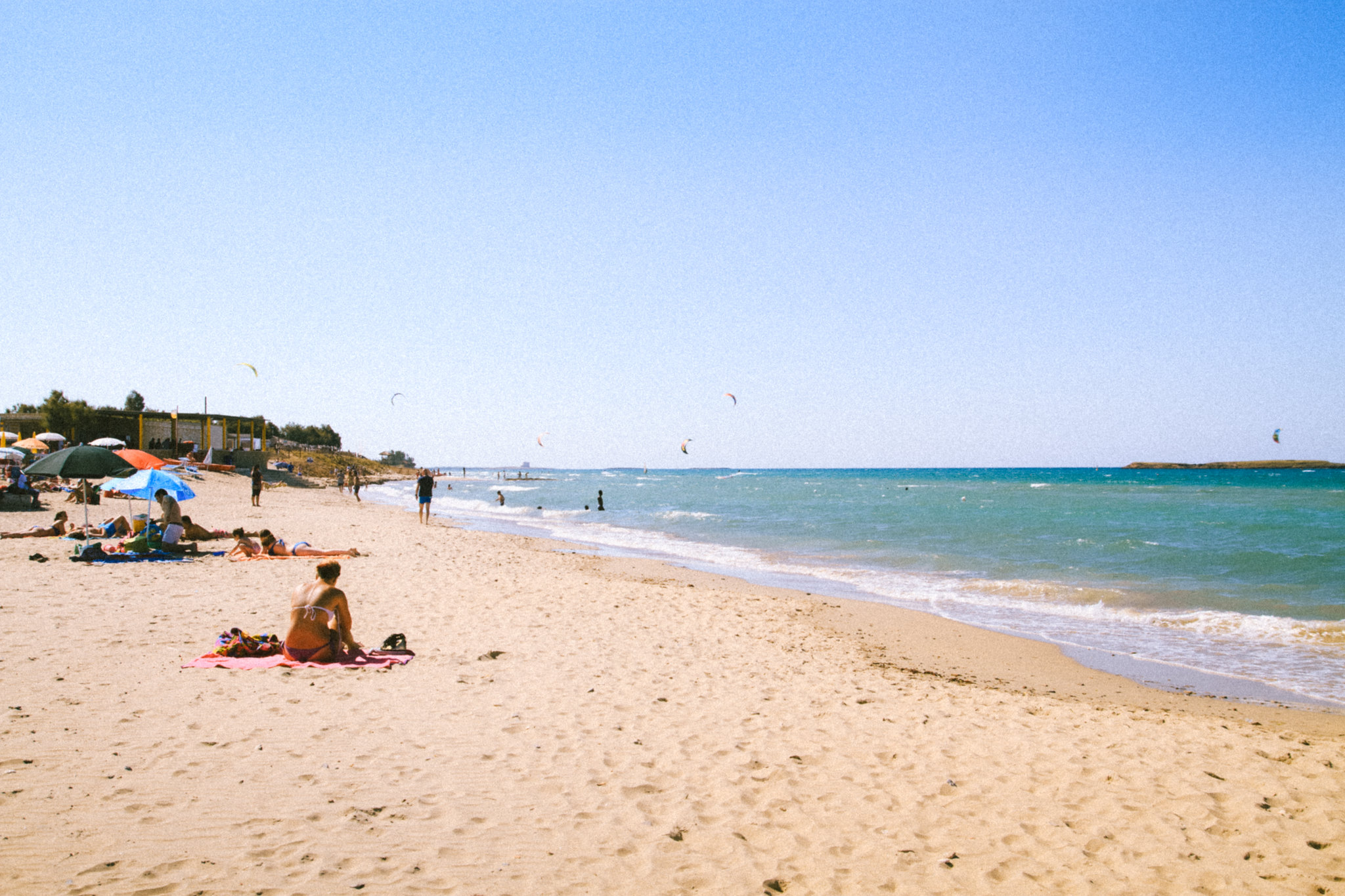 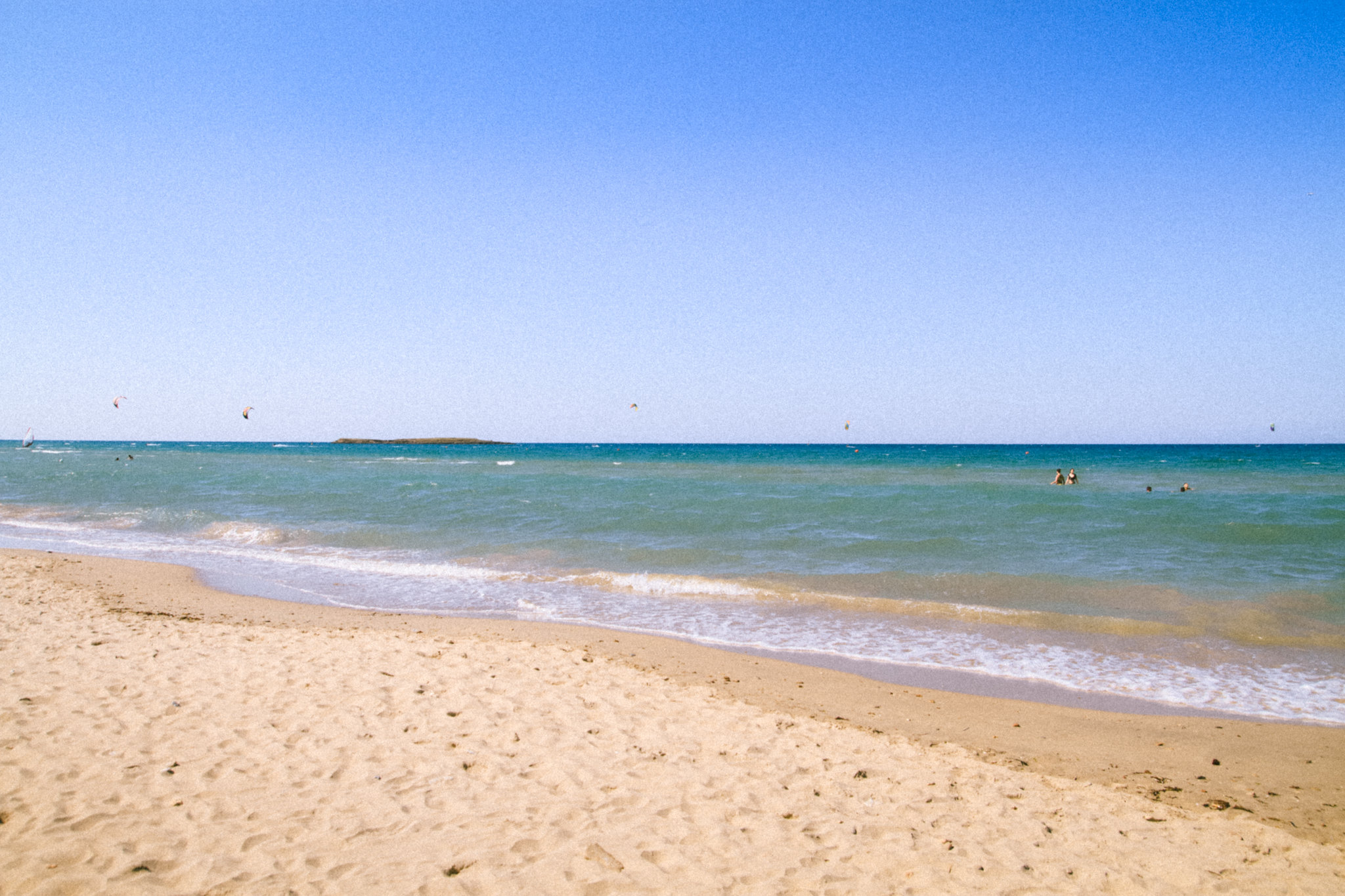 That’s it for my Puglia adventures. If you’re visiting the area, my advice would be to visit Polignano a Mare and have your beach experience over there since it’s a more interesting place than, e.g., the more generic Guna beach. Alberobello is also a nice place to visit, but I might not recommend Brindisi based on my experiences – you could do Ostuni (the town where the wedding was held) instead. It’s incredibly beautiful with all the white-washed buildings and the romantic feel! I’ve also heard good things about Gallipoli, which was, unfortunately, a bit too far away for us to visit on this trip.

Even though I’m really enjoying the Finnish winter and the snow at the moment, I’ve got to say that writing about swimming in the Mediterranean got me looking forward to perhaps dipping into the Indian Ocean in Tanzania – let’s hope we have time for a beach session in the midst of our work! More adventure posts coming up soon; it’s going to be a funny mix of Scotland, England, Sweden and Tanzania in this blog this spring, as I still have past trips to recount, too 🙂 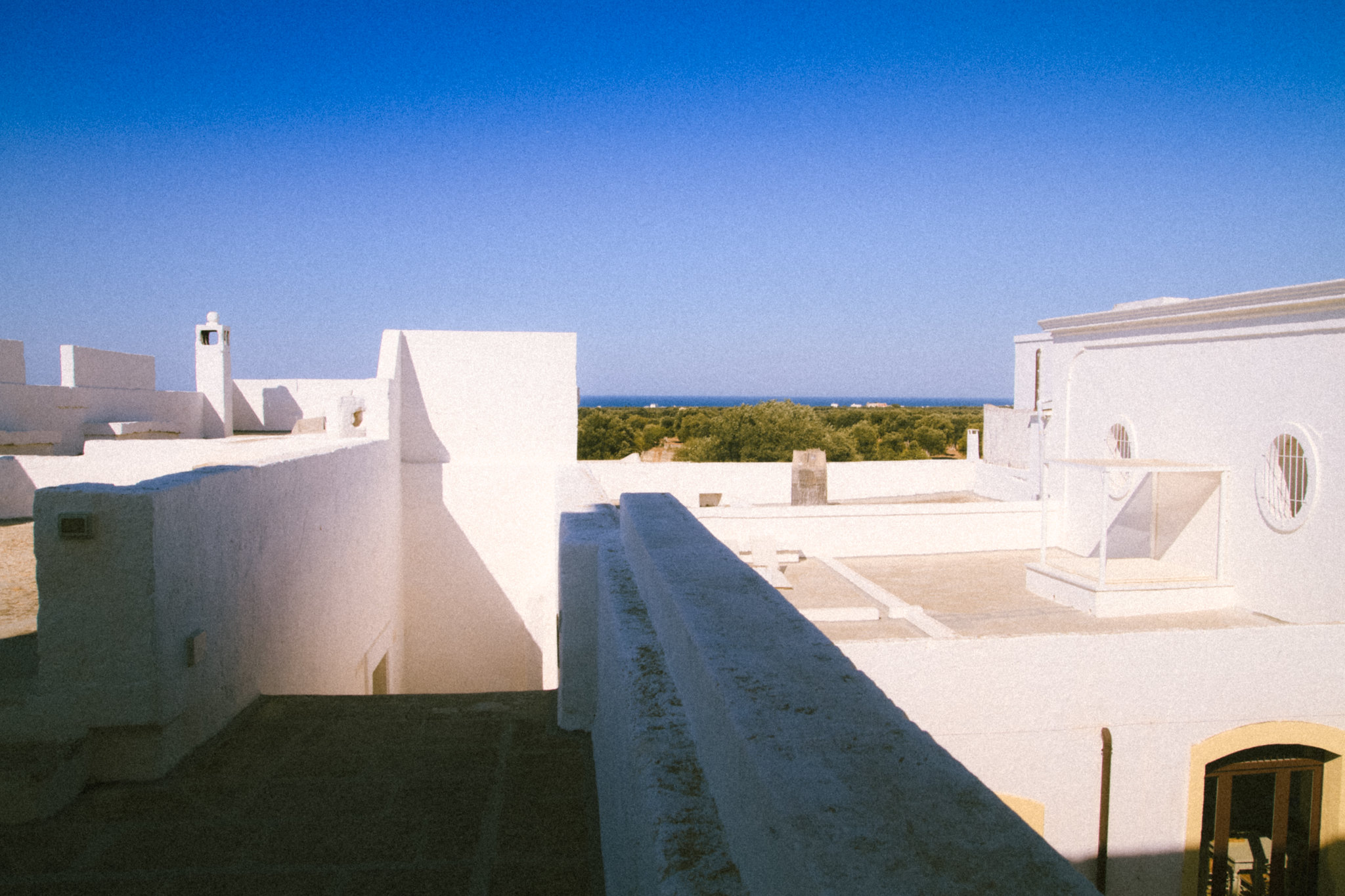